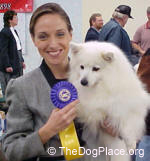 All About The Show Dog

Denver’s Plum Creek KC and Peak To Peak Working Dogs in new venue at Arapaho County Fairgrounds and great shows they are.