If our perceptive skills were as keen as a dog’s, we’d run like a scared rabbit from elective x-rays. In fact, when we consider that the use of disinfectants was once considered as radical as bathing, we should ask for reasonable justifications before we “take a deep breath and hold it” for the x-ray beam.

I fully acknowledge the miracles of medical science but the bottom line is that we are pretty much just cash on a conveyer belt moving through the medical system. Here’s a real-life example. In the hospital for 6 weeks with lung surgery, I was “out of it” for the first month but one morning two young technicians came in with the x-ray machine. As they jammed the cold x-ray plate behind my back I realized that day after day I’d seen the sun come up while going through that same procedure. “Who ordered these x-rays?” The one who could talk looked at the clipboard and said she didn’t know; that it was just “orders”. I told them not to come back until one of my doctors explained why I needed DAILY (!) chest x-rays. They didn't return and no one ever confessed but that in itself says it all and that is the point.  Every body suffers from radiation and every medical level profits... 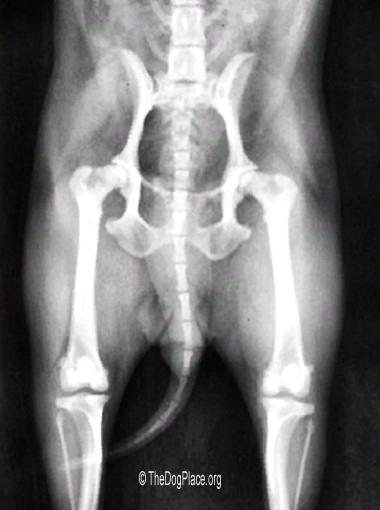 2016 statistics downplay the cancer-radiation risk. Tell it to the survivors of the Fukushima meltdown in Japan in a few more years. They are at high risk for thyroid cancer. Sure it was an extremely high exposure - and that brings me to organ shielding {1} for your dogs.  Stop and think. The x-ray has to be strong enough to reveal bone and joint density so it doesn’t take a radiologist to figure out that the ovaries and testicles receive a whopping dose!

Just because something “is” doesn’t mean it should continue to be. I googled for organ shielding in animals and there’s nothing! Well, nothing except a couple of old articles wherein I demanded radiograph shielding for canine lungs and heart or the reproductive system depending on the x-ray order. Human reproductive organs are further removed from the lungs but the canine reproductive system is, by virtue of proximity more difficult to shield but it can be done by a conscientious veterinary technician.

Speaking of hip x-rays, put this under your thinking cap. By the late 70s, many veterinarians were uncomfortable with the highly promoted theories that led thousands of dogs down the primrose path to the x-ray machine. When Gerry Schnelle, DVM (credited with the discovery of hip dysplasia in 1937) attempted to cite the disappointing Swedish CHD study results, he was hushed up.  Ultimately, he resigned from the OFA board.

Well before the end of the 20th century, most long-time breeders began to see that hip x-rays weren’t panning out. Sad to say, part of the statistical problem was a result of dishonest breeders who presented dogs that “glow in the dark”  due to OFA’s long refusal to require permanent I.D. For two decades I publicly derided Dr. Corley for and for failure to require permanent I.D. and for the despicable ($$$) practice of encouraging repeated radiation exposure to re-certify. Finally, he was gone, and in my opinion, not a moment too soon, replaced by Eddie Duzak, a real dog man who “gets it.”

Two years ago oday we have a whole new crop of freshly educated animal doctors, many of whom will continue to disregard the cumulative effects of radiation in favor of their bottom line. Beaming powerful radiation directly at the reproductive organs troubles them not at all.  In 2016 we know that the pharmaceutical and pet food companies provide "teaching materials" to veterinary universities.  Given the animal rights propaganda that also permeates veterinary schools today, one has to wonder if some newly-released (graduate) veterinarians might turn the power up a notch thinking “this one won’t contribute to the overpopulation problem”!

I hope this has given you a different perspective on elective X-rays so that for your own health, your children, and your dog, you can make informed decisions about radiation risks.

If you breed or show dogs, get your news at TheDogPress.com